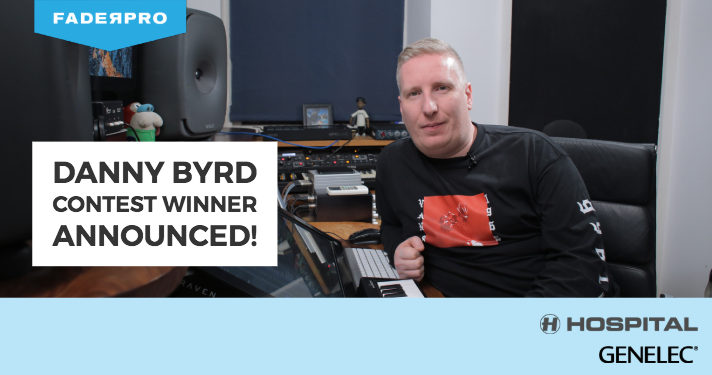 Back in October we launched a brand new FaderPro course with Hospital Records and Danny Byrd. Creating a track from scratch, Danny then offered up the track to be finished by you, with the winner bagging loads of Hospital Records goodies, plus a set of amazing Genelec 8020D studio monitors.

To celebrate the announcement we are giving $15 off the Danny Byrd Course for the next 50 customers! Use code DANNYBYRD15 at checkout!

Check out the track below to hear the finished record in full. and be sure to check out Crash Comet on Instagram and Soundcloud.

We caught up with Crash Comet, aka Daniel Rayan Patterson to find out more about why he entered the contest, working on the track and more…

Have you bought a FaderPro course before the Danny Byrd course?

No I haven’t but I would definitely be interested in buying another course in the future as I believe it greatly improved my production skills.

What made you enter the contest?

“I was actually planning on buying the course anyway, as I have always been a huge fan of Danny Byrd’s music and have already watched his other tutorials in the past, so the competition just felt like a massive bonus!

“Honestly I am still in shock from winning. To be chosen by one of the people that inspired me to make Liquid Drum and Bass in the first place is a huge honour and something I will never forget!”

What was your approach when finishing Danny’s record?

“I actually entered the contest extremely late due to having a lot of gigs around that time. So I only had 3 days to make the remix, which I have never been able to do before. I think the stems were so inspiring and that coupled together with the motivation and drive of the contest made me really push myself to make the best remix I could. Sometimes when you set yourself certain limitations as a producer, it can push you to work even harder and create something you didn’t think was possible.”

Are you looking forward to your new Genelec monitors! How will they help you in your music making?

“Yes indeed! I have also been a huge fan of Genelec Monitors but have never owned a pair of my own, so I am thrilled to test them out! I think they will help with my productions massively, as I will be using them to constantly A/B my mixes, which is something I haven’t really had the luxury of doing until now.”

What’s next for you? Where can people find out about your music?

“Currently I am working on two different releases that should be both be out before the summer. The first is a 2 track EP with a Drum & Bass producer called Linear, and the other is a collaboration with singer/songwriter Emily Makis which I am extremely excited about. I also have a remix coming out later this year, but I’m not sure if I’m allowed to talk about it yet. I’ve got a few gigs lined up in Bangalore, India, the scene is quite small here but is slowly building which is awesome to see. The best place for people to find me is Instagram [@crashcometmusic], but my music is of course available on all platforms such as SoundClound, Spotify etc.”

In The Studio w/ RODG