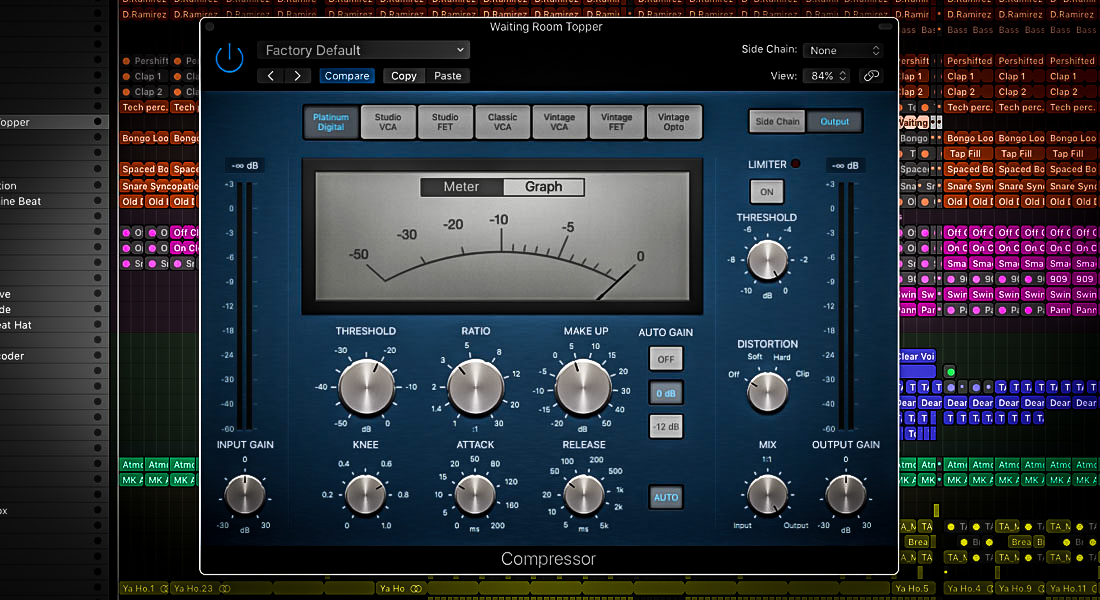 One of the most common subjects that people want to know about is how to better understand compression. Compression is one of the most widely used and mis-understood things in music production. It takes most producers years to truly master great compression techniques. I wanted to take a minute to explain compression to hopefully help those who are still trying to figure it out to better use, and not just over-use, this critical production tool.

First, what is compression? Compression is a way to make sounds appear louder without simply turning them up. So if you want a sound to be louder, what’s wrong with just turning it up? The answer is there are hard limits to how lout you can simply turn something up in a mix (HEADROOM), but it also comes down to dynamic range and how we perceive loudness. The dynamic range of a sound is the ratio of between the largest and smallest intensity of a sound, measured in decibels (dB). While that’s a nice textbook dictionary definition, what the hell does it really mean? Dynamic range has a lot to do with the “perceived” volume or intensity of a sound. We humans “perceive” loudness based on the average loudness (RMS) of a signal. Therefore, those sounds that have a higher average loudness (RMS) we will perceive as being louder than something that may have a higher PEAK intensity. Most metering tools allow you to select and view both the PEAK and RMS of the signal. Peak loudness could also have its own article, but for now, it’s simply the loudest part at any given moment. Peak is very important as well since we need to be careful with clipping and overloading (especially in the digital domain). Ok, let’s get back to compression.

When you compress a signal, you reduce (or lower) the peaks of the signal. This is done by setting a THRESHOLD at which the compressor will then work to reduce the signal as the peaks (loudest parts) cross above that THRESHOLD. The amount the signal is reduced depends on the RATIO of the compressor and how much it’s going above the threshold? No compression is a 1:1 ratio. For every 1dB you turn it up, it raises the level 1dB. Once you set the ratio setting of a compressor to say 4:1, then for every 4dB over the THRESHOLD the sound is attenuated (reduced) by 1dB. Easy enough, right?

So, once you’ve reduced the PEAKs of the sound, This allows you to turn up the WHOLE sound (think back to DYNAMIC RANGE) which will then raise the overall “perceived” loudness. Another way to think of it is that it will “feel” louder. This is why you may have heard people say this “lifts” the sound out of the mix. I’ve always like thinking of it that way too. After you’ve set the THRESHOLD and RATIO, you will then be able to raise the level back up with the MAKEUP GAIN, which effectively is the “lifting” part. Since the DYNAMIC RANGE has now been altered (COMPRESSED), the average and perceived loudest part can be raised back up.

When I started out, I was like most other budding producers, I overused compression…like, a lot! But once I really started to understand it and get a better handle on it, I learned that less is more. Most people start to hear that something is noticeably louder at around 3dB of change. I always laugh to myself in mix sessions when some artist or other producer tells me to raise a sound 1 or 1.5 dB. But that is another topic for another day. Anyway, for a majority of sounds, vocals, snares, bass etc, a lot of times 3-4 dB is all you need. It’s always easier to turn things UP, but harder to turn things down once you are deep in a session with a lot of tracks and plug-ins. Also, one sound aggressively compressed is one thing, but a production where every track is smashed with compression adds up to one big sonic blob.

There are many other pieces to the compression puzzle like ATTACK (how fast/slow the compressor starts working), RELEASE (how fast/slow the compressor stops working), KNEE (how sharp or curved the turnover point of the compressor is at the threshold) etc. But I’ll save that for another day. The last thing I want to say is that a lot of compressor plug-ins have an automatic make-up gain feature. While this makes sense, I would say I use this at most half of the time, mostly if I’m in a hurry. But I find that when I want to really dial in a particular sound, auto-makeup seems to over-work in many cases. I prefer to use the meters and my ears to get the makeup gain just right.

I hope this has helped put a simpler perspective on a very complex subject. The graphic below at the bottom of this post shows what I talked about above. You can look at the original signal, the when you compress it, it lowers the PEAK (depending on the RATIO and THRESHOLD settings) and thus COMPRESSES or “squashes” the sound down. Then, when you apply the MAKE-UP GAIN, it “lifts” the whole perceived loudness (RMS) part of the signal and therefore it “sounds” or “feels” louder, due to the change in the DYNAMIC RANGE characteristics of the sound.

If you’ve enjoyed this post or would like to learn more, drop me a line at the contact link below. All of us here at FaderPro always love hearing from you.

Until next time. ~Vincent

————
Who is this guy??
Vincent di Pasquale is a multi-platinum producer/remixer and is one of the co-founders of FaderPro. He worked for many years at the world-renowned Hit Factory/Criteria studios in Miami and has remixed songs for Madonna, Justin Timberlake, Nelly Furtado, Mariah Carey, and many other high-profile artists. To learn more about his musical story, check out his Artist Access feature HERE.

Get To Know FaderPro’s Tom Hoch